Gluing horn for the first time was a f****ng disaster

At least there are no gaps and glue was still liquid at the last clamp. 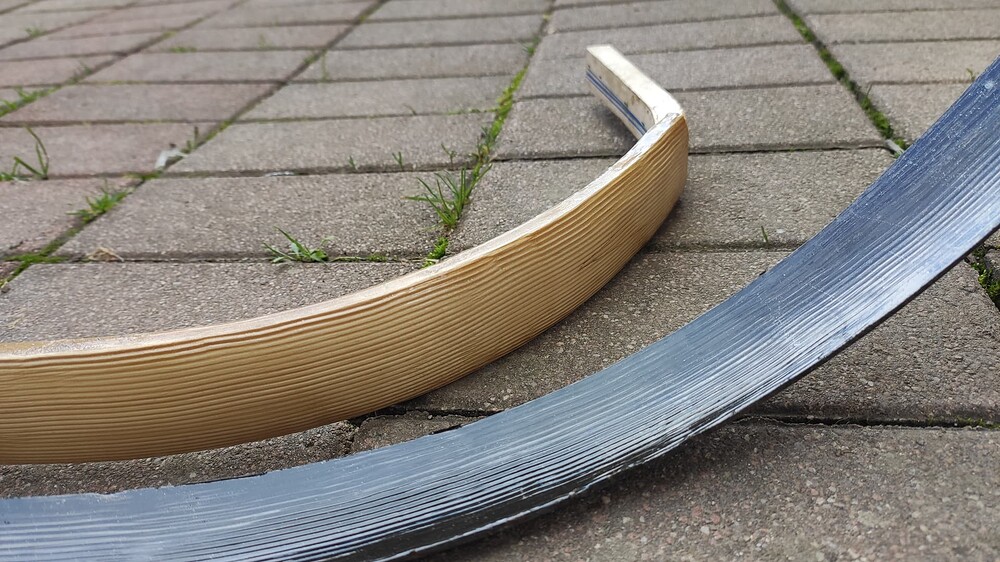 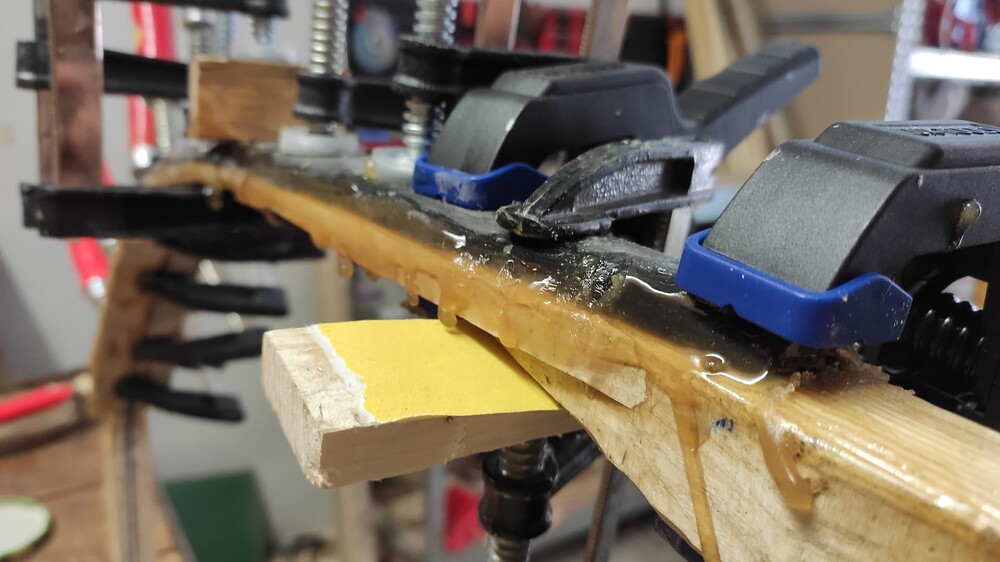 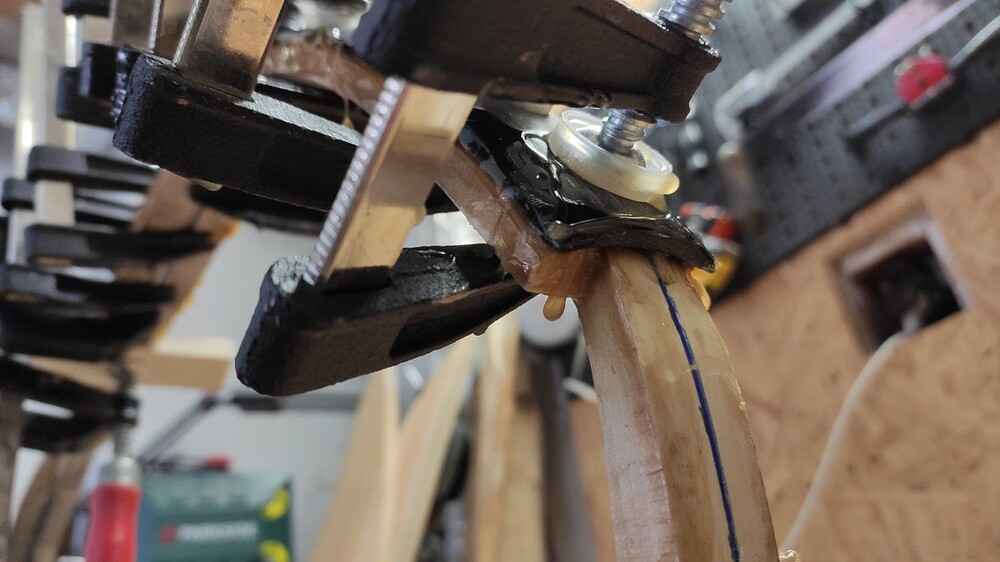 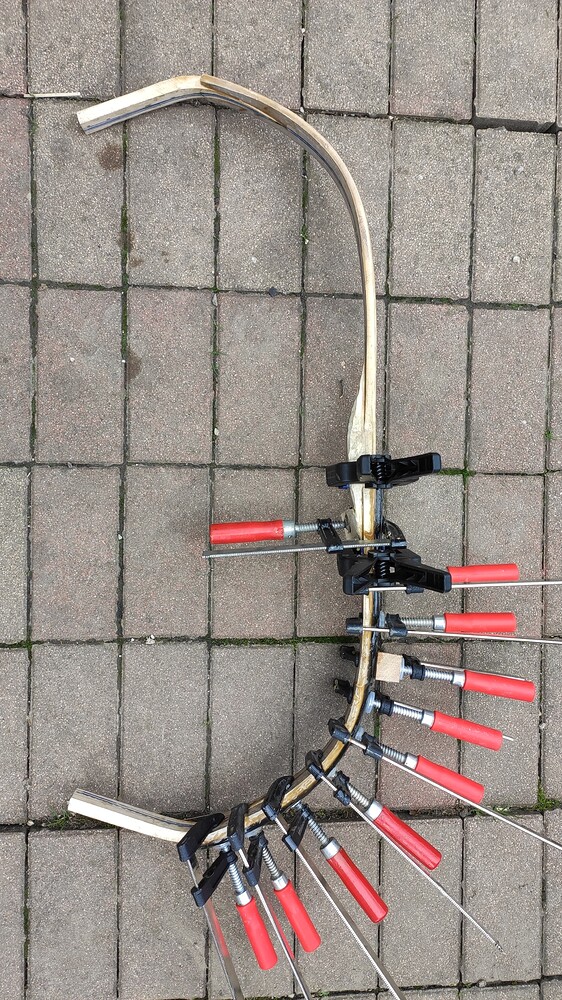 Heh, this is why you need rope and tencik. Now you don’t have any pressure at th edge of the horn. With rope you would have.

Yes, there are a lot of places where there is no pressure

I will use tencik for my next bow in the summer.

Is there a safe way to remove horn and glue it again ? I’ve tried heat after about two days from glue up, I thought there would be enough moisture between horn and core but it’s not working. Maybe steam ?

Soaking in water and then steam. Or you could leave the bow somewhere really humid place, 80% or so. Maybe steaming after that would work.

All of these methods will effect the core somehow. When wood is bent to form and then you heat it again, it will spring back. However, its also easier to shape it back to the wanted shape with heatgun and clamps.

If you’re in a hurry, maybe you could saw it along the line of gluing (if the core is thick enough) and then grind the rest of wood from the valley of the horn strip on your machine.

I wanted to fix the upper limb because the horn is too far to the right. But it’s probably ok I’ll get a 30mm limb from that.
Glue line seems to be ok too. 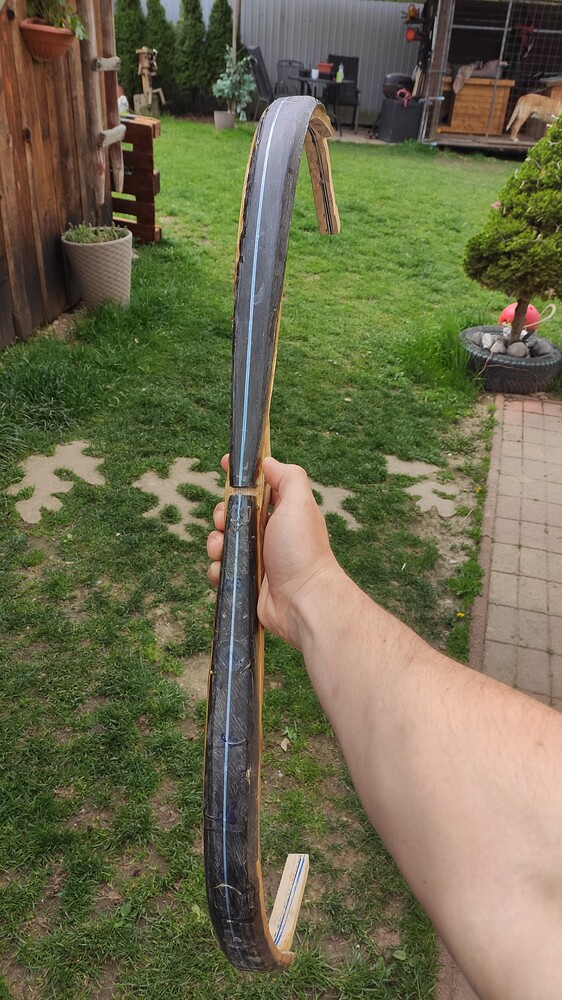 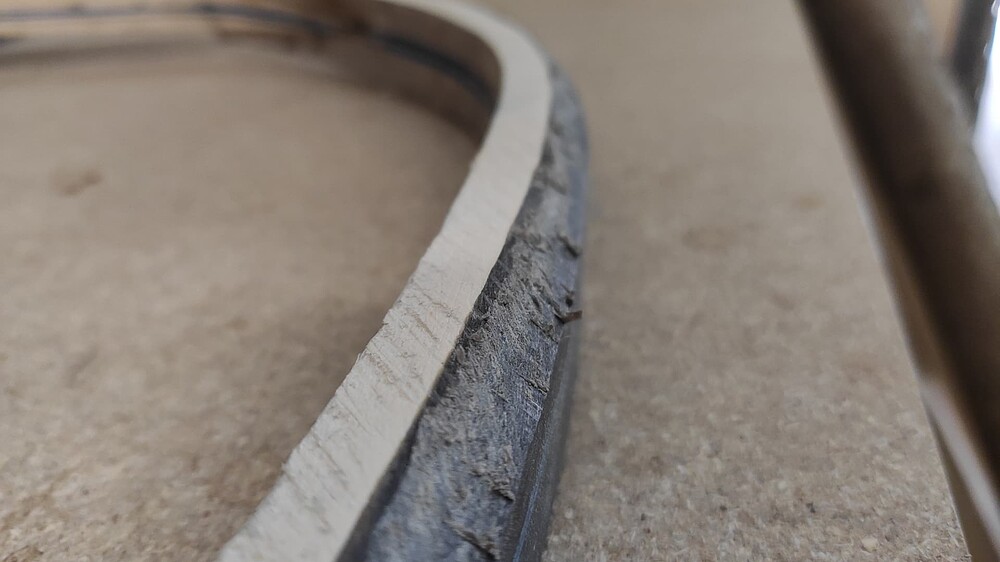 Today I tested the stronger glue (250) on some horn scraps and it looks promising. I let it dry for 24 hours and then I tried to break it with hammer and chisel. 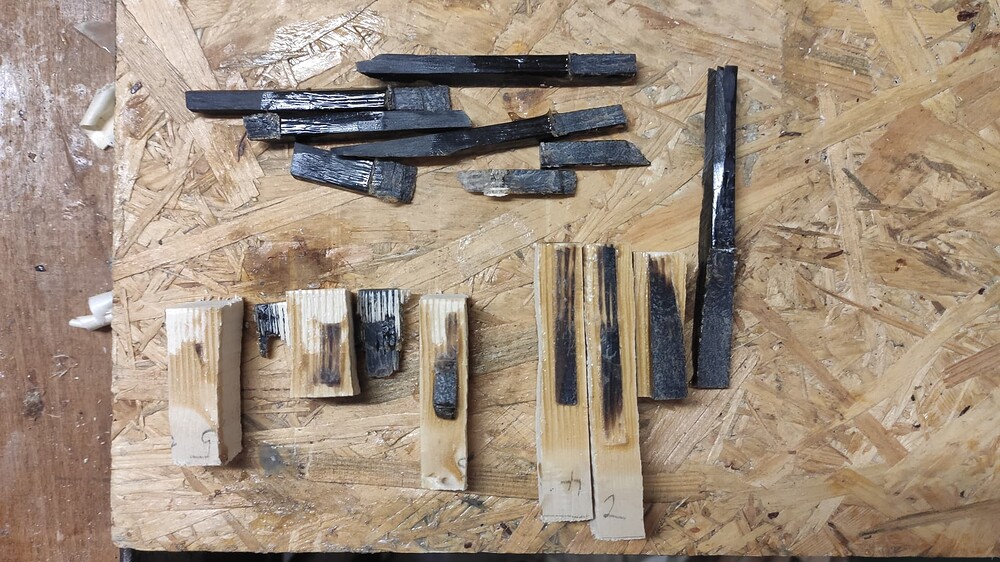 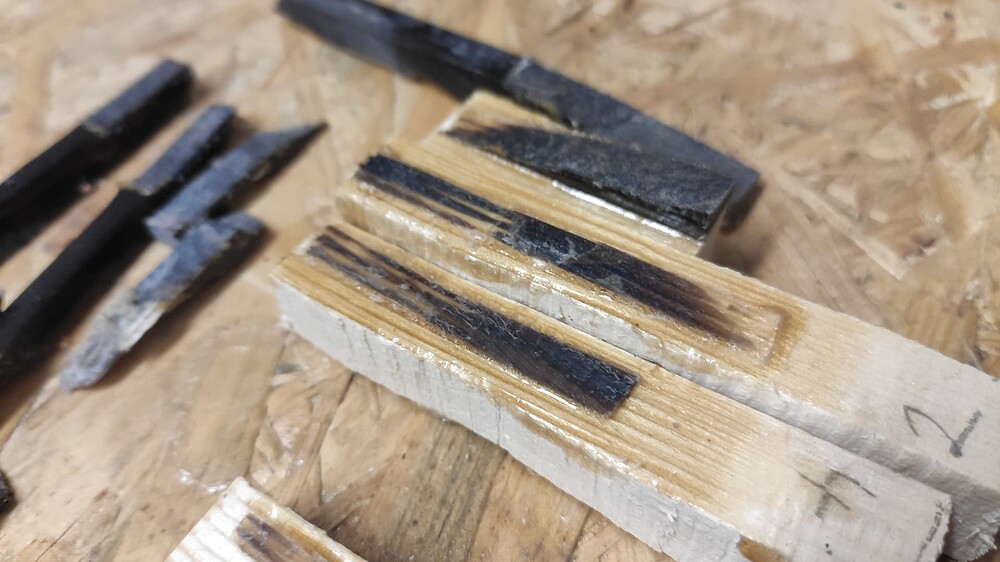 Well I cut and tested small sample from the bow and the adhesion to the horn is pretty bad. Horn can be easily separated from wood and glue. Sizing didn’t work. But I size it in a same way and in same environment as the test samples

Did you fill the grooves? It would be best if you had a image of finished stage when you have horn and wood core grooves filled.

Maybe “not good enough” washing off the previous sizings caused some problems with the adhesion of new sizing ( because you wrote, that you do not heat horn strip beforehand ) ?

Yes Jere grooves were full. The joint from sample separated in the horn/glue interface. The Glue that was on horn was removed from grooves and remained on the core.
To jano I didn’t heat the scraps either and they were glued perfectly.
Anyway I’ve managed to remove horn with wedges and steam without damage.

There was one difference in sizing, the scraps had shiny surface after about 5th layer and then I put another 20. On the horn for bow I stoped immediately when it becomes shiny and moved to filling grooves.

Gluing horn is fun I must say.

I took that into account and tried to explain, that on the scraps you applied the sizing on fresh surface, while on the strips you started new sizing on the “remnants” of old sizing, whose did not merge enough with new layer without heating.

Probably you will enjoy more fun later too

Jano you were probably right. I’ve done a lot of tests lately, and I had failures on all horn samples where I didn’t scrape old glue ( I just washed it down). So for good sizing I need washing and then scraping. Or just scraping.

I also tested more hide glues, sturgeon bladder glue and long boiled sinew glue and all failed except just one. That 250 hide glue.
My test is simple. I just build up 1mm thick glue layer on flat horn surface and then I’m trying to peel it of with knife, or by bending the horn.
250 hide glue is ripping pieces of horn from the surface. All other glues just peels of leaving the horn surface untouched.

Cool! Where can you buy 250 hide glue? Do you have a good source?

I bought 210, 250 and 275 from Tanex, Company from Czech Republic. Specifically topaz I is the only one that is working for horn. Kožní klíh | TANEX Vladislav s.r.o..
I’m little disappointed from sturgeon glue.

Thanks! Well, you don’t need sturgeon glue if you have good hide glue.

We just yesterday had a phone conversation with Tuomo about this matter. What i have found is I need 3% only fish glue starter, then after multiple thin layers i can proceed to adding hide glue. Maybe 7% layer after few days. But for the beginning 3% only fish glue.
If 250 bloom strength hide glue works, there is no need for fish glue.

Do they sell to private customers? How about pricing and payments? And is it possible to buy just one kilogram, etc.?

I ordered from Kremer-Pigment different kind of animal glues for testing, and I would like to try Tanex-glue also.

I started a new project after the fail, three pairs of horns are waiting glue. Again, the first attempt failed. I will create soon a new topic for my new turkish bows.

Last time I bought just 1kg. Write them email. You should definitely make some test before gluing. At least size and glue one horn tip leftower to the maple plank and smash it with hammer.

Today was my second attempt. At 40C degrees on the sun it was pleasure to work with hide glue.
This time with proper tool - tencik.
Then I moved the bow to the cold room (22C). 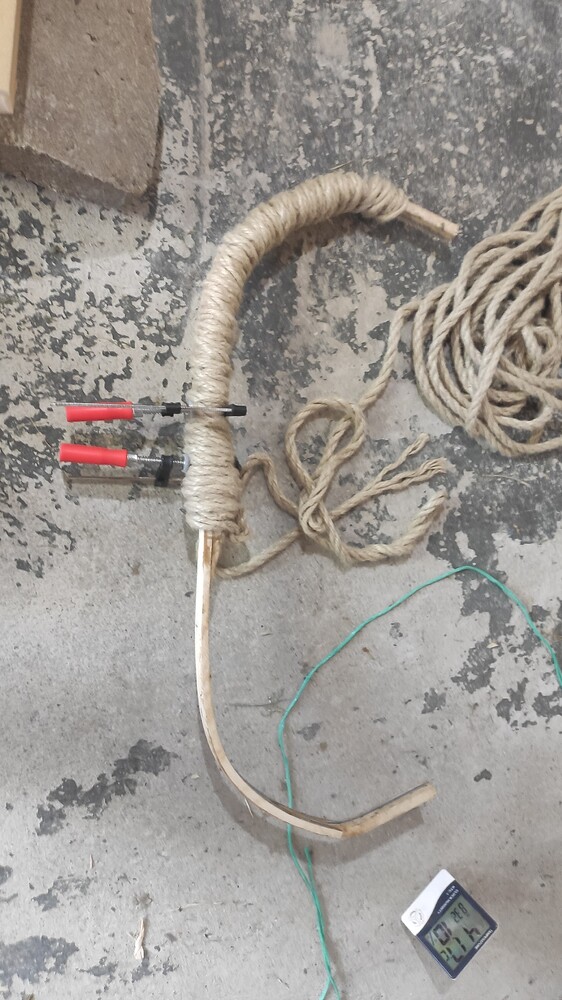 Looks good. How its supposed to be.

Ready for shaping and sinewing. How long do you wait after gluing horn ? Horn is 8mm at grip, 6mm in mid sal and 4.5mm in kasan eye. It has in one limb slightly diagonal crack in kasan eye so I think it will be a light bow for safety. 60 pound probably.

I must say I love tencik 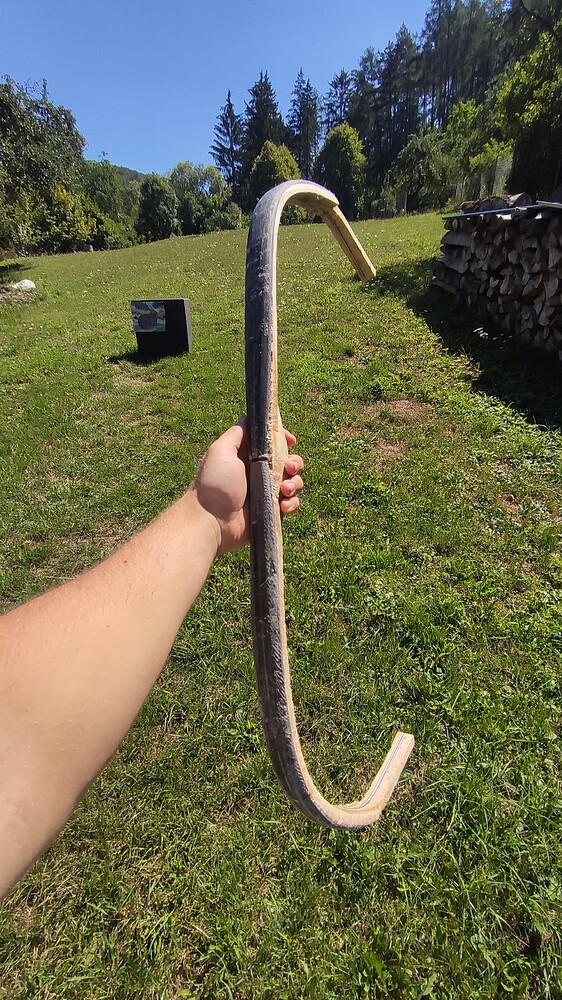